It should be pretty clear by now that the level of effort devoted to manipulating our opinions is unprecedented at the moment. Granted, a lot of this has to do with the fact that most of the "free" online services we use aren't free at all. They are trading our ability to make measured opinions for advertisers' money, and some of these "advertisers" are foreign governments.

With all of these attempts to manipulate us into doing things we otherwise don't want to do -- many of which are surprisingly successful -- there is one question we should be asking of any inflammatory story: Why?

We focus on the what, where, and when almost exclusively, but it's become increasingly important for us to know the motive behind the news. Last week's op-ed in The New York Times is a good example, because the "why" is likely far more interesting than what is said in the piece.

I'll close with my product of the week: Cinego, an impressive head-mounted streaming video system.

So even if Google were unbiased, the results from Google search would look biased, because of what appears to be an overwhelming bias in the news media. It appears that Google's bias is stronger politically than it is financially, because people don't like to look at information that disagrees with their world view.

Sales, marketing and politics -- in governments, companies and a lot of family dynamics -- are all about manipulation. Understanding the need to manipulate and being able to identify it are critical skills to becoming successful in most any field. Both confirmation bias and argumentative theory have at their cores an inbred programmed foundation of needing to manipulate others, which often overcomes good sense and even self-preservation.

The ability to manipulate is a form of power and status, and it currently revolves around an ever-changing but still growing group of people we call "influencers," which is just a nice way to say "manipulators at scale." You can profit handsomely from this, particularly if you are good at it, but if you allow yourself to be manipulated by someone who doesn't have your best interests at heart, the results can be personally damaging.

One of the painful trends now is the ramped-up activity of folks who attempt to manipulate you -- a less kind term is defraud you -- into sending them money. Facebook seems to be up to its armpits in folks like this at the moment. It has a reporting structure in place. Email and, particularly, the age-old scam phone calls are variants of this game.

The defense is to simply ask "why" they are calling you. In most cases, they want your money or your information. For instance, you get a note on Facebook from someone you've never met who wants a relationship. The person doesn't know you, probably hasn't even read your profile, and really doesn't care what you look like. Chances are the "why" is they want you to send them money. Knowing this you don't engage.

The op-ed The New York Times published last week spotlights a presidency in crisis -- so much so that apparently there is an internal "resistance" trying to make sure the president doesn't screw up. I've worked in a lot of companies and the idea of having a group of executives and assistants working to keep the CEO from doing something stupid isn't as unusual as you might think. This is likely something Elon Musk should have in place before he gets himself fired.

The new Bob Woodward book does suggest the White House is a bit of a mess. That shouldn't be a huge surprise, even if you only look at the unprecedented turnover rate of cabinet members .

The book is pretty damning, and it appears to be well written and well researched -- but it doesn't really cover that much new ground. The New York Times op-ed doesn't really add much to the book, or to other recent books, except for the idea of an organized "resistance."

The result of an op-ed like this typically would not be a change in behavior. Rather, it would trigger an all-out effort to find and fire the writer, not to mention pretty much render the "resistance" moot.

If your effectiveness as a group is predicated on your secrecy, why would you break secrecy, unless you wanted to torpedo the group or someone in it? We are a few months from a critical election. If you could get one party to go on a witch hunt inside itself, you likely could distract it enough so that it would be far more likely to lose.

This would be an important question for The New York Times , because these things tend to come out, and the Times trying to manipulate an election would be problematic for that publication, regardless of whether it knew this or not.

Another answer to the "why" question might involve a disgruntled employee who was passed over for a promised raise. (Money is a lousy motivator when you add it, according to Maslow, but if you take it away it works incredibly well at motivating employees against you.) The president effectively just took raises off the table for all federal workers (which should result in a huge number of them wanting him gone).

The op-ed could be a play to tarnish someone else with Mike Pence the seemingly obvious target , given some unusual wording. (But why target Pence?)

A scarier thought is that the Times op-ed was designed specifically to do what it is doing. However, instead of influencing the upcoming mid-term elections, its purpose might be to eliminate the effort to keep the president from doing something massively stupid.

In other words, the op-ed's goal might be to render ineffective any effort to prevent a catastrophic presidential decision. Now whether that is the intention or not, that is the likely outcome. That doesn't bode well for the United States, if the president's judgment is massively compromised, as Woodward's book and the op-ed suggest.

The actual "why" behind this op-ed may be far more important than what it says.

We are under an almost constant barrage of companies and people who are trying to get us to do things we otherwise wouldn't do. From scamming us for money or information to scamming us to vote against our own best interests, the level of effort going into manipulating us is unprecedented.

What concerns me about The New York Times op-ed is that, regardless of whether it is true or not, it will disable efforts to prevent a presidential mistake. In the future, anyone who should attempt to play that role likely would be fired.

The "why" is always important. In this case, the answer to "why" may be that someone wants to do the country harm. I doubt this will end well at all. In any case, to protect ourselves from the increasing waves of manipulation, we need to channel our inner 3-year-olds and ask "why" far more often.

I get really bored when I have my teeth cleaned. I have to sit in the chair for up to an hour (my tartar likely could be used in building construction, it is so hard), and I get really bored watching the ceiling fan and waiting for surprise pains.

My last appointment wasn't so bad, however, as I brought my Goovis G2 Cinego headset with me. Rather than watch the fan, I watched the sci-fi movie Serenity , and I was disappointed the appointment didn't last longer. 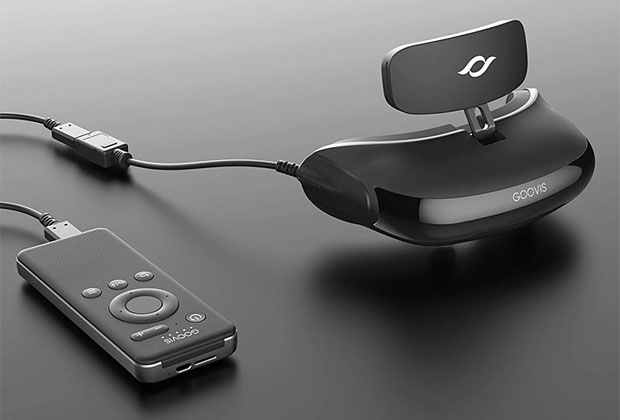 What makes the difference with Cinego is the combination of high resolution displays for each eye. You can adjust for the distance between your pupils and for focus individually. This result is a crystal-clear high-resolution image that is impressive in use.

Finally, and this is a good thing, the book showcases some of the companies that treat their employees well including a VC where they have focused not only on excellent work/life balance, but also on investing in firms that specifically focus on making the world a better place.

I ordered my Goovis G2 Cinego through Indiegogo when the product was first launched and got a decent deal -- under US$500. Currently they are on Amazon for close to $800, but for those of us who like to enjoy high-quality personal video in tight places, this is still a decent product for the money.

Cinego isn't without issues. For instance, I can't seem to raise support to save my life. The software update function currently is not working, and I can't log into Google or Amazon from the device at the moment. (Issues such as these often arise with the initial run of a product.)

When Cinego does work, mostly with Netflix, it is brilliant. Navigation is pretty easy, as is streaming content. Viewing downloaded content is a bit more difficult. Both the picture and sound are wonderful. Battery life is about two movies, suggesting that you'll want a charging cable (micros USB) or a portable battery backup product for long trips.

Except for poor support and the inability to use Amazon or sign into Google, I really am impressed with the performance of this product. As a result, the Goovis G2 Cinego headset is my product of the week.

I'll add this cautionary advice, though: Before you buy one, I suggest you send a note to Goovis to see if you get a response. The lack of support is troubling.