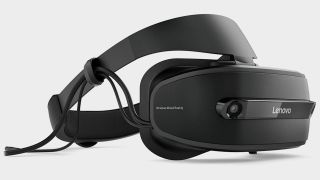 Virtual reality games let you experience things you never could on a monitor. But just a couple years ago, they required high-end gaming rigs with expensive headsets. Thankfully, that's no longer true. While you still can spend hundreds of dollars on an HTC Vive or Oculus Rift if you want the best possible VR experience, you can also buy a Windows Mixed Reality headset and enjoy many of the same games with the PC you already have.

In this post, we'll go over how to get into VR gaming while saving some money, either by buying a cheaper headset or shopping for a holiday deal. And we'll tell you how how the cheaper Windows Mixed Reality headsets differ from the mainstream Vive and Rift headsets.

Holiday deals on the Oculus Rift, Vive and VR games

Oculus dropped the price of the Rift + Touch combo to $349 over Cyber Monday, then decided to keep that price for the holiday season. The Rift still costs $349 on the Oculus store .

The Viveport store, which actually carries tons of games that work on the Vive and the Oculus Rift, is having a big holiday sale from December 13 . This includes up to 40 percent off a whole order, which will hopefully apply to a headset. And some games are discounted by as much as 95 percent. So even if you already have one of the headsets, it'll be a great way to stock up on a library of VR games.

Those deals will be the cheapest way to get into high-end PC VR this holiday. But if that's still too rich for your blood, there's still a great alternative: Windows Mixed Reality.

What is Windows Mixed Reality? 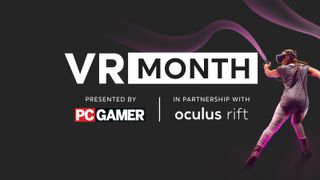 For the next three weeks, PC Gamer is focusing on what's new, what's coming, and what's most exciting in virtual reality. Read all of our VR Month coverage. You can find even more VR content on our sister site, TechRadar .

Before explaining what the difference is between Windows Mixed Reality and other VR platforms, it's important to understand what WMR is. There's a lot of misinformation about Microsoft's VR platform, mostly in relation to what games it can play, but I'll lay out the facts—coming from someone who owns the Dell WMR headset.

HTC's Vive Pro VR headset gives you a sharper and more immersive view of virtual worlds, but the hefty price tag means it's only for the most hardcore VR fans.

Windows Mixed Reality is the platform that Microsoft developed for both virtual reality headsets (like the ones you play games with) and augmented reality displays (like the Microsoft HoloLens )—hence the name Mixed Reality. It's basically a Windows interface presented in 3D; you can open the Start Menu, ask Cortana to open an application, move around windows, and so on.

When you put on a Windows Mixed Reality VR headset, you are placed into a virtual house. Here you can re-arrange the furniture, pin app windows to the walls, and so on. Most apps from the Windows Store can function in Mixed Reality, and you can even interact with your PC desktop by launching the 'Desktop' app from the Start Menu.

You can easily run Mixed Reality on a mid-range PC, and Microsoft made an app that checks if your computer is up to the task. But if you're running games that also run on other VR headsets, expect the system requirements to be about the same.

The other main difference between WMR and the Vive/Rift is that Mixed Reality headsets use "inside-out" tracking. Instead of having external sensors that need to "see" the headset (like the Vive/Rift use), Mixed Reality headsets have cameras on the viewer itself. Oculus is using this same technique with its new headset, the Quest . External sensors have an advantage in accuracy and latency, but inside-out tracking keeps getting better. As long as your room is well lit, WMR's inside-out technique should get the job done.

The main critiques of these headsets, which are notably cheaper than the Vive and the Rift, are the build quality, ergonomics and tracking of the controllers and the narrower FOV on some models. The controllers aren't as refined as the Oculus Touch, but are still more than capable of handling the frenetic Beat Saber on the hardest difficulty .

Being the Quest priced as a Rift, I don’t know how many people will still choose to buy a PC-powered Rift (Image by Ars Technica) All the newest PC VR headsets seem to target the high-end enterprise market : Star VR One, XTAL, Vive Pro, Varjo, are all devices that are very expensive (the Vive Pro kit starts from $1400, Varjo will cost more than $5000) and offer high-end features.

What games work on Mixed Reality?

One of the misconceptions about Mixed Reality is that you have to buy games from the Microsoft Store, but that's not true at all.

Microsoft worked with Valve to add support for SteamVR , so nearly every VR game on Steam works out of the box on Mixed Reality Headsets. You can check if a game officially supports Windows Mixed Reality by looking at the Steam product description—there's a 'VR Support' box on the right side of the page. 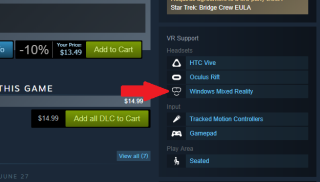 You can also use this filter to only view WMR games. Most popular VR games already support Mixed Reality headsets, but many that never added official compatibility still work—like Google Earth VR and VRChat .

Steam also displays which VR headsets a game supports in search results—just look for the WMR icon below the game title (it looks like a smiling Cylon ).

Which Mixed Reality headset should I buy?

With the exception of the premium Samsung Odyssey headset, all Mixed Reality headsets are indentical hardware-wise. Each has a 90Hz 2880 x 1440 display and the same depth sensors. That gives them the same refresh rate as the Rift and Vive, but higher resolution displays.

The FOV varies slightly between WMR headset, from 95 degrees to 110 degrees, which is the FOV of the Vive and Rift. If you want the better field of view, the Dell headset is a good comppromise at 105 degrees.

Either way, that’s a drop in the bucket compared to the titles available on Go. We also don’t know exactly how much memory the Quest is going to have, which is always a concern with self-contained VR technology.

One trade-off of these affordable WMR headsets: there's no built-in audio. All of the Mixed Reality headsets use the same Windows VR controllers, and you'll definitely want those for motion controls.

The headsets from Acer and Lenovo used to go on sale frequently, but they seem to now be discontinued. At the time of writing, HP's headset is the cheapest, at around $200-250 (depending on the retailer). You can also find Lenovo's headset without the controllers for around $100 from various stores, but most games require motion controllers. 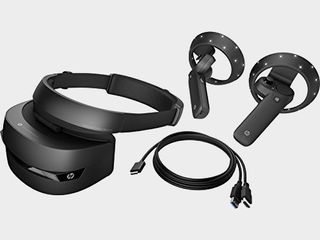 HP Mixed Reality Headset | $200-250
This seems to be the cheapest Mixed Reality headset right now, the price ranges from $200-250 depending on where you buy it from. Buy at Amazon , Buy at Microsoft 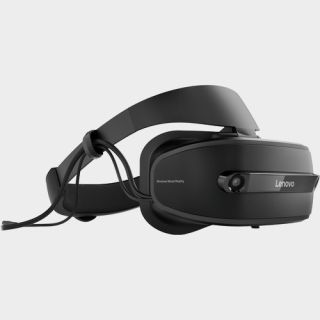 Lenovo Explorer Mixed Reality Headset (Iron Gray) | $99.99
If you mainly want to play racing simulators and other games that don't require motion controllers, this is the absolute cheapest way to get into PC VR. Buy at B&H

If you don't mind buying used/open-box headsets, you can find plenty of people selling their old Mixed Reality devices on eBay . Even though WMR headsets are quite good, the demand for them is relatively low, so many sellers will list them for very low prices.

And for more on VR gaming on a budget, check out our sister site Techradar's guide to building a VR-capable PC for under $700 .