Dev Story: The Future of VR is Social

Ask any fan of Star Wars what they most yearn to reenact in a video game, and they’ll likely tell you two things: lightsaber duels and space battles.

Last year’s Star Wars Jedi: Fallen Order from Respawn gave us the first in a strong and sleek package. Now, another Electronic Arts studio — the Canadian developer Motive, which was responsible in part for Star Wars Battlefront II — is bringing us the second in the form of Star Wars: Squadrons. It’s a space combat game that puts you in the cockpit of classic Star Wars spacecraft, including TIE ships and the New Republic Wing series, with a unique story campaign and robust multiplayer modes inspired by EA’s Battlefield and Battlefront series.
‘Squadrons’ straddles the line between a hardcore flight simulator and an accessible ‘Star Wars’ game

Star Wars: Squadrons developer Motive says that the game is built around the “spiritual core of the best Star Wars flight games of the past.” Today the studio revealed the first gameplay trailer which offers a full breakdown of the game’s ships and modes.

Epic star fleet showdowns are a central component to the franchise’s longtime appeal and a nod to Lucasfilm’s pioneering special effects talents. The good news is that Squadrons is shaping up to deliver an experience that feels true to the series without veering too much into flight simulator territory. I got to play the game’s roughly one-hour prologue and close to two hours of multiplayer earlier this week, using a top-of-the-line gaming PC provided by EA to experience Squadrons with all settings maxed out.

It’s an astonishingly difficult game if you’re unfamiliar with the broader flight sim and space combat genres. But Squadrons is also accessibly designed, much like a racing game, with a set of systems that automate away harder tasks until you learn, improve, and — once you’re ready — really take flight.More than anything, Squadrons feels like a faithful re-creation of the chaos of a space battle. Playing the game is like experiencing a Star Wars movie in the best ways. Engaging in dogfights, chasing down a fleeing rogue ship, and squadding up with four others to assault a cruiser all feel instantly more cinematic when you’re viewing everything from a cockpit in first person, and the game’s high-fidelity visuals make it virtually indistinguishable from Hollywood CGI. 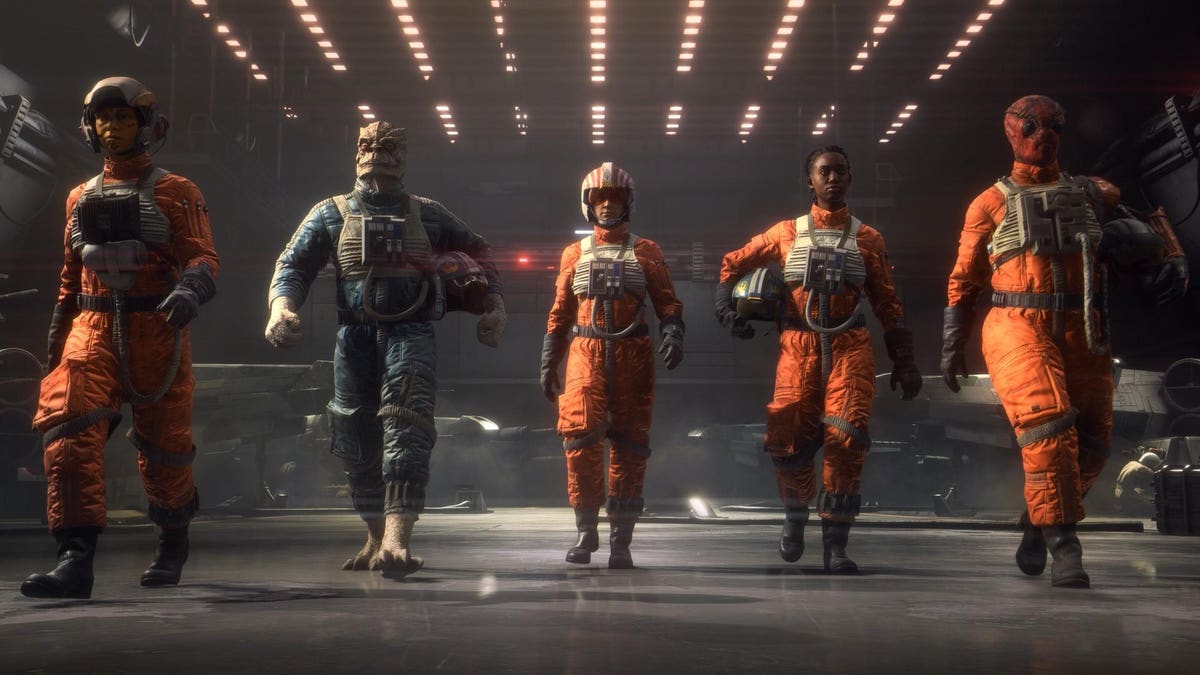 ‘Star Wars: Squadrons’ Will Have VR Support On Both PC And PS4

When I lost control of my fighter trying to engage in a close-quarters chase through the inner workings of a much larger ship, I visibly winced throughout those last grisly spins. Barrel rolling and engaging your boosters to escape a missile can feel almost nauseating. But once you’re acclimated, everything in Squadrons starts to feel like an exhilarating theme park ride.

Once you’re acclimated, everything in ‘Squadrons’ starts to feel like an exhilarating theme park ride
I did not get the chance to play the game in virtual reality, but Motive says the entirety of Squadrons will be playable on PC VR headsets and PlayStation VR. You’ll even be able to play VR multiplayer with non-VR users; the game supports full cross-platform play across PC, PS4, and Xbox One, with VR an optional add-on for the campaign or multiplayer wherever you see fit. The game will also support HOTAS (Hands On Throttle And Stick) controllers for a true flight sim experience, but I used a mix of gamepad and mouse and keyboard to test out the different everyday schemes.

The demo began with the game’s prologue, which teases a unique story built in bits and pieces from the expanded Star Wars canon. It contains some names familiar to those steeped in lore, but it’s mostly an all-new narrative set between the events of the Return of the Jedi and The Force Awakens. You play as both a resistance pilot with the New Republic and a member of the fading Empire, which is caught up in a power struggle after the defeat of its leadership.It’s an engaging enough story, featuring strong writing and dialogue that plays out through the communications channels in your cockpit. There are some standard cutscenes, but most of the story takes place while you’re in a ship and flying around as part of a squad of AI-controlled companions. Motive wouldn’t say exactly how long the campaign is, but creative director Ian Frazier insinuated that it’s about the length of a standard story mode for a multiplayer-focused shooter, so perhaps eight to 15 hours by my estimation.

The real meat of the game, however, is in the multiplayer. I got to experience a few of the main modes: a squad-based five-versus-five battle, a one-on-one dogfight mode, and then a larger objective-focused mode called Fleet Battle reminiscent of Battlefront’s Conquest. These modes are where the real depth of the combat shined through. I was completely out of my league in most situations, fighting against a mix of experienced EA pilots and other demo players that could pull off inexplicably complicated aerial maneuvers and accurately aim their blasters under extreme duress.

If you want to go deep in ‘Squadrons’ and master its flight controls, you can
Motive is stressing that for those that want to go deep with Squadrons, they can. There are intricate power management features, so you can shift your ship’s various systems to amplify speed, power, or shields either in bulk presets or — for very experienced pilots — down to single point values.

Each ship class also has various strengths and weaknesses, different component advantages you can customize, and a dizzying array of weapon choices. Most of these more advanced tactics involve deploying a different ship setting mid-flight and often under fire, turning Squadrons into an extraordinarily complicated multitasking affair for those who really want to feel the heat of being a space pilot.

It’s worth noting that Squadrons doesn’t seem like it will be for everyone. Just like how Fallen Order was a very specific type of action roleplaying game, Squadrons is trying to make a crossover space combat title that can appeal to hardcore fans and exist comfortably alongside genre mainstays like Elite: Dangerous. It’s a tough juggling act, and my biggest fear is that the steep difficulty curve means most players won’t be able to cut it when they get through the campaign and find that the multiplayer is all that’s left.

Motive is smartly removing all microtransactions from the game; Frazier tells us that you couldn’t pay money for ship cosmetics even if you wanted to. Everything in the game, which will cost $40 at launch on October 2nd, is unlockable. That could give less competitive players a reason to keep playing even if they never really take to the game’s controls and its more punishing-than-normal multiplayer. Yet, most people should be prepared to erupt in a fiery explosion time and time again until they’ve mastered the basics well enough to take on more experienced pilots.

Perhaps that’s a trade-off worth making. I can only imagine the level of immersion Squadrons provides when you wear a proper VR headset and use a HOTAS controller. Pleasing that type of player appears to be one of EA and Motive’s top priorities, and I can see Squadrons becoming a big success if it manages to win them over, no matter how many of us inexperienced pilots they convince to hop in the cockpit of an X-Wing.

Star Wars: Squadrons will launch on October 2nd for PC, PlayStation 4, and Xbox One.

Dev Story: The Future of VR is Social