5 Data Integration Technology Trends for 2018
Smart technologies such as AI, chatbots and augmented analytics generate overwhelming amounts of data. Here are some important integration trends that will give your enterprise an edge. Learn more.

The reasons behind Apple's fight against Qualcomm seem as poorly founded as President Trump's reasons for wanting a wall. Pretty much everyone who understands walls -- including China, which has the biggest -- knows they don't really work. Unless you can afford to man the thing, people will find ways over or under it.

With ever-bigger drones in development, it likely would be a matter of months before someone figured out how to build human-carrying drones to fly over en masse (or they could just buy, or more likely rent, one of these ).

So why does Trump really want a wall? It likely is because it would be called "Trump's Wall" and it could be seen from space. It effectively would be a lasting monument to Trump -- you know, the guy who puts his name on all his properties and has to be written into any movie shot on one .

Apple recently was blocked from selling the prior generation of iPhones in China for violating two patents that will be almost impossible to work around. Perhaps taking a page from President Trump's book, the company did argue that it already had done that -- but anyone can pick up a new iPhone and see that, ah, no it hadn't.

If you look into the case, you'll find the only reason Apple's new phones aren't blocked too is because they didn't exist when Qualcomm filed its complaint. Apparently you can't file a complaint about a theft before that theft actually occurs, even if it obviously is about to. That seems so last century. Suddenly the movie Minority Report comes to mind Anyway, Qualcomm has moved to fix that . Not that it really matters because, apparently, you can't give an iPhone away in China at the moment.

I'll examine Apple vs. Qualcomm and close with my product of the week: the Fossil Sport Smartwatch.

Building Trump's wall as a solution to unlawful immigration doesn't make sense, given that it wouldn't work. Similarly, Apple's stated reason for going after Qualcomm for overcharging makes no sense. If Apple were being impacted adversely by Qualcomm overcharges, it wouldn't have been first to a trillion-dollar valuation ( that didn't last long ). In a market where the margins are typically 17 percent, it wouldn't have whopping 42 percent margins.

I'm reminded of the old joke about the guy being pulled over for speeding saying, "Officer, I wasn't speeding -- but I passed a guy a few miles back who was!" Most companies in the telecom industry are fine with letting Qualcomm develop the infrastructure so they can focus on differentiating to customers.

Qualcomm's 2G, 3G, 4G, 5G cadence, plus advances in things like imaging and music, ensures that smartphone users have to upgrade their phones at least every 10 years which ensures revenue (and this is an industry that lives on phone churn). Qualcomm is a good deal of the engine that makes everyone, including Apple, money.

So why would Apple hate Qualcomm so much that it wants to put the firm out of business? It's because Apple uses a lock-in strategy, where once on an Apple platform it is painful to get off. Most of the smart Apple iPhone users I know actually use Google apps and Google's infrastructure and other third-party tools on their iPhones, so if they want to move to an Android phone they can move almost seamlessly. However, this always assumes there is an Android phone to move too.

Why It Won't Work

There are two big reasons why Apple's strategy is stupid. One is that firms that have gone down this lock-in path typically have tended to abuse their power and mine their users for money. Apple clearly is doing this already, and the proof is that whopping 42 percent margin in a 17 percent margin market.

Apple is milking its users for nearly 3x the profit as any other firm. That, by any measure, is excessive, and the company doesn't even have full lock-in yet. Although you may be willing to pay more for a smartphone than a laptop (which makes no sense to me, by the way) will you be willing to spend for a smartphone than a car? That seems doubtful, particularly when vendors that have this kind of dominance don't spend money to advance their products.

Remember Microsoft's Internet Explorer? It had something like 94 percent share, but then stopped developing the product. Today IE is pretty much dead, and the browser is largely owned by Google.

The other reason this won't work is antitrust laws. Standard Oil, RCA and AT&T, all once dominant, are now gone. (Today's AT&T is a different company with the same name.) Governments don't like companies to gain that kind of power, and they appear to be really good at putting those firms out of business.

So, even if Apple got to where it wants to go, it would be screwed. It already faces a challenge in the Supreme Court (the U.S. Department of Justice is the plaintiff) which looks really bad for the company.

Why This Likely Will Get Worse for Apple

The last two companies to get rid of their lock-in strategies were IBM and Microsoft. Lock-in very nearly put IBM out of business while I worked there, and when I wrote the internal paper on why IBM fell, that was one of the primary causes.

IBM had taken its eye off the goal of pleasing customers and instead put it on ever more-creative ways to gouge those customers for money. Those customers eventually revolted, and the trauma to IBM was almost fatal. The firm never wants to make that mistake again and now is a huge open source champion.

Microsoft's experience was with governments and regulation. Its lock-in resulted in some historically high fines, running in the billions of dollars, and almost got the firm broken up. It was such a nightmare that the company's iconic CEO, Bill Gates, stepped down. It helped cripple the company for nearly a decade.

Microsoft too is now a huge fan of interoperability and open source, realizing it is better to give customers a choice -- and focus on being the best choice -- than it is to lock in customers and force them to buy increasingly inferior offerings, while mining them for money.

Ironically, Microsoft passed Apple in valuation with this strategy (and arguably is the better investment ), so the company rightfully loves it (and given it is really customer-friendly, we should as well).

Further on this Microsoft vs. Apple comparison, if you read the article I linked to in the above paragraph, you'll see that Apple has a Supreme Court problem in the U.S. for abusing its lock-in power and overcharging in its app store. The Microsoft connection is that this isn't that dissimilar, with regard to exposure, as what Microsoft faced with the DoJ, and it didn't seem to take that risk seriously enough either.

The high-end model will have design features introduced in the iPhone X -- a glass back with stainless steel edges and dual cameras on the back -- and support viewing of app content side-by-side on the large display.

Speaking of not taking governments seriously, apparently Apple is completely ignoring the Chinese ban . This is arguably worse than Microsoft saying the U.S. Attorney General didn't matter, because as a U.S. company Microsoft is protected under the Constitution (First Amendment).

Apple is a U.S. company ignoring Chinese laws, and China isn't exactly known for tolerating open defiance. Basically, Apple appears to be saying though its actions that in China, the Chinese courts aren't the boss of them. I really don't think that will end well.

I think Apple is out of control, and that its efforts to try to corner the market on smartphones won't work. If they did, the result would be incredibly damaging to the company. Luck isn't with Apple either, with its products being boycotted in China on top of the injunction, and with the Supreme Court trial pitting it against the US DoJ. (If the DoJ should win, it would open the floodgates for state and foreign government cases, much like what happened to Microsoft, with potential damages that collectively could be in the high billions.)

Apple really need to get back to its knitting and stop acting as though it is above the law. Other firms in its place had to learn the hard way, and most of them no longer exist, even though they once owned their collective markets. I don't know about you, but I really get tired of watching highly paid executives behave badly.

I included this product in my buying guide a couple of weeks ago, and I've now been wearing this Fossil Sport Smartwatch for more than a month. This is really the first smartwatch that deserved to have "watch" in its name. 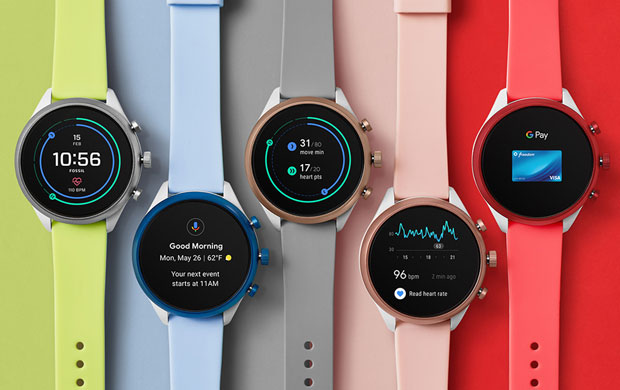 Watches once were status symbols that provided instant time and were more like jewelry. Most smartwatches (and I maintain the Apple Watch is a wearable computer not a "watch" at all) have blacked out screens most of the time.

The Fossil Sport Smartwatch uses the new Qualcomm Snapdragon Wear 3100 platform which focused on making a smartwatch a watch. This means you can leave the display active and still get a full day's battery life. It will work longer than a day in a pinch, but it will go into low power mode, so it can keep working to go the distance.

Typical feature sets include music control on your phone, vibrate on ring (it automatically turns off the ringer on your phone when it is on your wrist) which has saved me being embarrassed several times, heart rate monitor, steps, Noonlight (kind of like OnStar for people), and the typical hose of Google Wear apps.

Good luck getting one of these things, though, as they've been sold out for the last several weeks. It prices out at around US$250, which isn't bad given the similar Mont Blanc watch is about 4x that and pretty much does the same stuff. This is the best smartwatch I've had so far, and it is a natural for my product of the week.